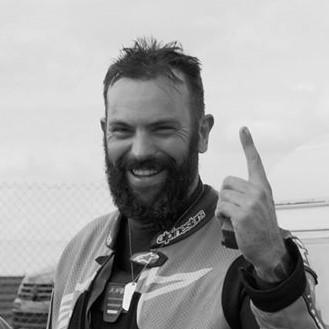 Matt Hinnells, or "Foo" as he is known in and around the paddock has been riding motorbikes since he was 11 on anything he could throw his leg over. In 2005 Foo brought his 1st track bike (Suzuki GSXR K2) as his friend had brought one also, and thought he would give riding on track ago.

After doing many track days, Foo’s friend thought he'd have a go at getting his race licence and race his bike. Needless to say, Foo followed. In 2006 Foo competed in his 1st ever race, in the Rookie 600's. Foo was 100% hooked and couldn't get enough. 14 years on Foo is still doing it and loving every minute of it, meeting new friends and new challenges along the way.

Foo raced in the Thunder Bike Extreme class on a 02 Aprilia Mille, since 2015, and proudly finished 2nd in the Championship for 2 seasons. Foo is also the Thunderbikes Extreme and Ultra’s rider’s rep. Previous to that Foo was competing in the Minitwins class for 6 years.

After taking a small sabbatical away from competing a full season last year, Foo is now back competing in the new Thunderbike Ultra class in 2020, that Foo was involved with creating. Foo has the fire back and ready to ruffle some feathers.

Foo will be competing in the Thunderbike Ultra class on a 2008 Yamaha R1 4c8.